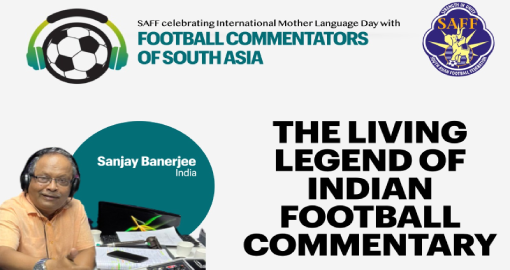 Mr. Sanjay Banerjee is the most known voice in the Indian sporting scene. Perhaps, he is the Hindi voice behind almost every significant football tournament happening in India for the last three decades. He holds the distinction of commentating in the World Cup of three major sports: Hockey, Football, and Cricket.

Hailing from Jabalpur, Mr. Sanjay spent his early days at school playing football. His friends used to encourage him to do commentary, so at times he would sit on the sideline doing a live commentary as the game progressed. He completed his postgraduate degree in Sociology and went on to earn a Personnel Management PG Diploma . Mr. Sanjay’s father was an IAS officer, so the family expected him to sit for the UPSC exam and become a civil servant. But he wanted more from life than the traditional administrative career.

Because of families wishes he worked for a year in a factory but couldn’t take his mind off of sports. As a 22-year-old, Sanjay joined the All India Radio as an Announcer in Ranchi. Later he was selected for AIR news and also started doing sports commentary side by side. His early days working as an Announcer at Samrat Orchestra, Jabalpur helped him to quickly improvise his skills and adapt to the job in Radio. He became a familiar voice very soon because commentary comes naturally to him.

After 1987, when he was a newsreader at the Patna station of All India Radio, his career took further height as he got assignments for National and International matches. His career excelled further as he worked for Radio Japan NHK for three years and after that joined as the sports editor of Sahara Samay in India.

Weaving magic through his words, Sanjay’s voice became synonymous with all major sporting events in India. During the FIFA World Cup in Germany 2006, which he covered for the state broadcaster All India Radio and also happend to cover 3 different editions of the Olympics from the venue. In the 2017 FIFA U-17 World Cup hosted by India successfully, Sanjay's voice reached millions of audiences in major matches. Not to mention, he was also the commentator for many of the SAFF tournaments in India.

While having a throwback to some of his favorite memories Mr. Sanjay says, “ I still have a vivid memory of the 2006 FIFA World Cup. The lively crowd, mesmerizing ambiance, energetic spirit, everything was too contagious and unforgettable. Nothing can be compared to that experience.”

He says that if you want to work as a commentator, simply having technical knowledge isn’t enough. Love for the game, control on your voice, and good modulation would see you through. Your voice eventually becomes your identity and that’s how you essentially become very much part of the game.