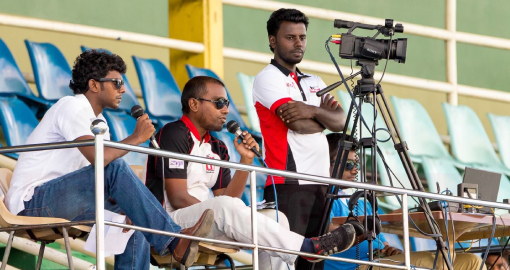 Mr. Navod Wijewickrama has been an avid sports fan since his childhood. He has done commentaries for multiple sports mainly Football, Rugby, Cricket, Basketball, Tennis, Netball and Volleyball but considers Football as the sport he is most passionate about.

Navod started his career in commentary while doing his degree in Economics and Finance. He was only 22 years old and his first ever commentary was covering a football match. He remembers, “My first Football Commentary was the FA Cup Final in 2013 between Army & Blue Star. I was nervous being amidst 12,000-15,000 vociferous fans packed inside the Sugathadasa Stadium, but later enjoyed the game when my nervousness went away.”

Soon he received much appreciation and more opportunities to cover more football tournaments, content, video, live, presenting etc. What started off as a side hustle while doing his studies quickly became his passion and has allowed him to widen his scopes and unearth his hidden skills.

In 2012 he joined a Sri Lanka based sports media & production company called ThePapare.com which was later bought by Dialog Axiata PLC in late 2013. Dialog was one of the main sponsors of Football Sri Lanka and he joined Dialog full time in May 2016. Since 2013 he has been heading the Football Vertical at ThePapare.com. He has commentated in about 250+ football matches (local & international) mainly in English and sometimes in Sinhala.

Highlighting the importance of having a mentor in the industry, Navod says, “All what I have done and achieved wouldn’t have been possible if not for my Editor in Chief and mentor Mrs. Ganeesha David, whose knowledge and advice shaped me in the Sports Industry.’’

He has done commentary in FIFA World Cup Qualifiers, AFC Asian Cup Qualifiers, AFC Cup Qualifying Play-offs & AFC U-16 Women's Championship qualification when Sri Lanka hosted the matches.
In Navod’s words, “Football is nothing without the fans. The thousands of fans that throng to the stadium that scream and cheer their lungs out. The electrifying feeling I feel as I enter a stadium, the sense of something great, something magical and memorable will unfold in the next 90 minutes. Until that final whistle the game keeps you on your toes. My favourite memory would be the 2013 Dialog Champions League Final between Air Force and Renown in Kalutara a the Vernon Fernando Stadium. Though it was a neutral venue, the crowds filled every inch of the Stadium and I was blown away.”

Due to a lack of training and education in sports commentary, he had to mostly rely on self learning. A lot of his experience have been shaped through watching hundreds of international matches EPL, World Cup, Euros etc, listening to other great commentators like Peter Drury, Clive Tyldesley and Martin Tyler. Still now, before covering a match he takes preparation and has notes ready on the players, clubs, tournament, previous ties between the two sides etc.

He feels South Asian football is advancing yet except for major venues, most grounds do not have a dedicated well facilitated area for media or do the production which needs to improve since viewership is important.