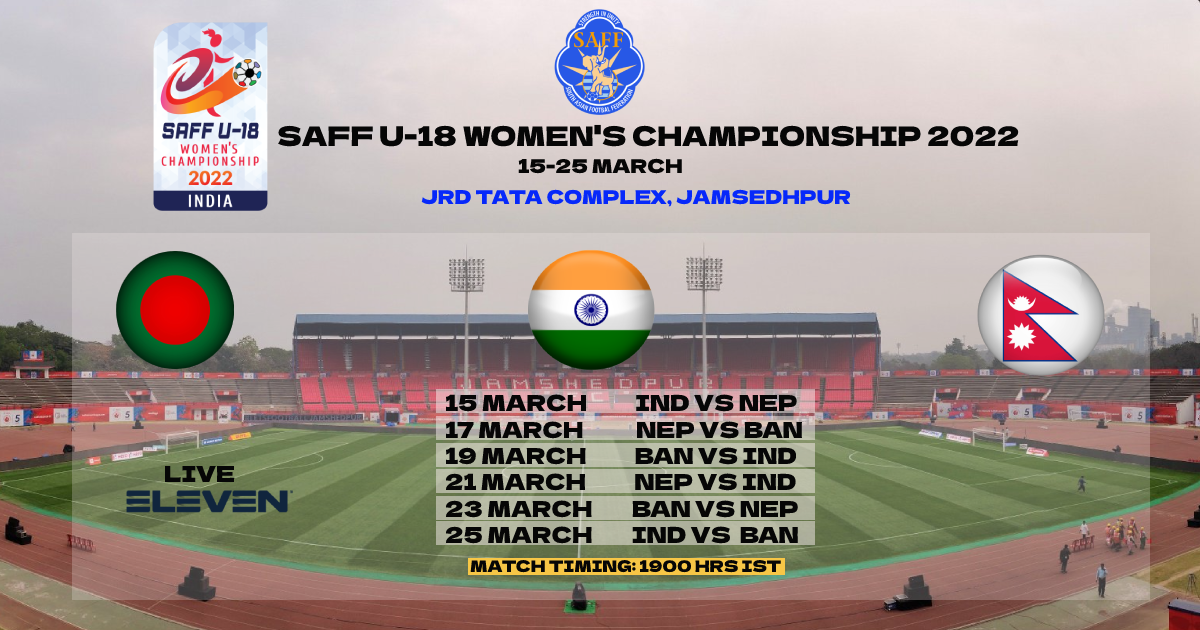 As the stage gets set for the SAFF U-18 Women's Championship 2022, all team coaches have expressed their confidence of a good showing.

Bangladesh, host India and Nepal will be eyeing the trophy of the championship which is scheduled to kick off on Tuesday (15 March) at the JRD Tata Complex. Host India will face Nepal in the opening match, while Bangladesh have their first match against Nepal on Thursday (17 March).

With three teams in fray, the team with the highest number of points at the end of the double round league will declared the winner.

India team coach Thomas Dennerby said, "We have been camped for a while now. It's been four weeks here in the camp in Jamsedhpur. We have had time to prepare in the best way and we are really prepared for the game tomorrow. At the same time we take the opportunity to thank the government here in Jharkhand and the Tata Steel Company for helping us with the facilities. We are in good shape and we are ready for the match."

Host India have a good balance in the squad as it comprises of few players who have had national team experience. The majority of the players are from the team that played in the recently held SAFF U-19 Women's Championship in Dhaka in December.

"Bangladesh and India are strong team, but Nepal is also a strong side. So it is difficult to say which is the best among the three teams. It is always difficult to play against the home team but we will give our best and play as the situation demands," said Lawat. "The players have been selected from the Deputy Mayor Cup, which is the qualifying round for the Nepal National Women's League, and different district. There are also 11 players from the SAFF U-19 Women's Championship took place in Bangladesh in December last year. The preparation for this event has been very good as we have been together for the last 20 days."

Lastly Bangladesh coach Golam Robbai Choton said, " We have been preparing very hard since the first week of January. Before coming to India, we played three practice matches. India is a strong team. They have a lot of advantage as they have the home support but Bangladesh will give their best. The tournament will be very competitive as all three teams are very strong. India and Nepal are always strong opposition. Our girls have been giving really good results in the last few tournaments. They have won the SAFF U-18 as well as the SAFF U-19 competitions in the past. We are lucky that we will be playing only on the second day so it gives us a chance to read both the teams well and prepare our strategy. "