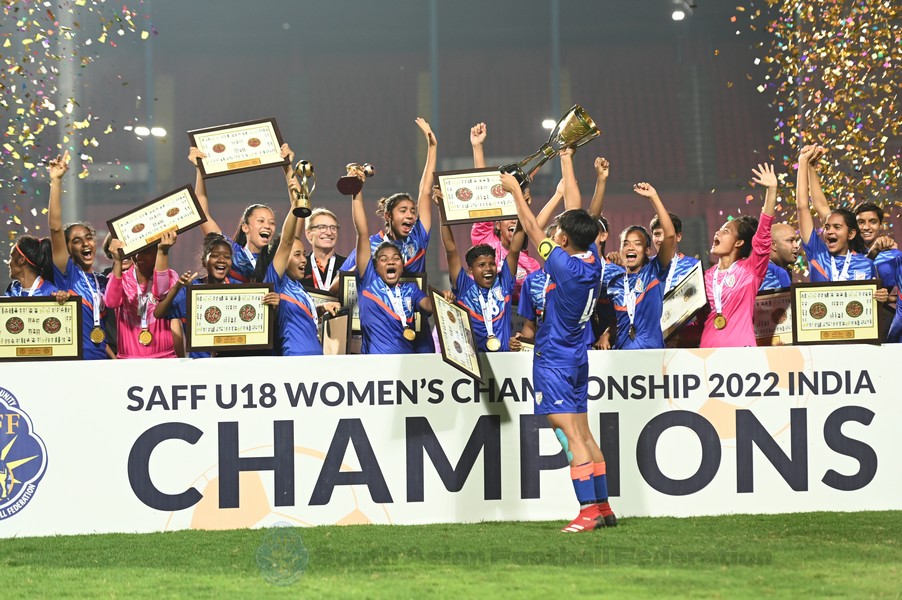 India won the title of the SAFF U-18 Women's Championship 2022 after finishing on the top table with nine points and with a superior goal difference over Bangladesh.

On the last match of the three-nation tournament, Bangladesh scraped a 1-0 win over host India but the the score line was not enough for the Bangladesh to retain the title. The final standings of the competition saw India lead table with a goal difference of 11 as compared to Bangladesh's 3.

Bangladesh also ended with nine points from four matches, while Nepal remained bottom with no points to their credit.

On paper it was definitely the home team who looked the better side having won all their previous three matches that too with a huge a goal margin to boost. On the team's arrival India coach Thomas Dennerby had said that his team looked in good shape to win the tournament. However, Bangladesh had other ideas to stop the strong Indian attack.

India could have found themselves in the lead in the 40th minute but Nitu Linda's effort from close range hit the upright. Bangladesh, on the other hand, pressed in hard to find the winning goal, and they were rewarded in the 74th minute when Most Aklima Khatun found the back of the net connecting a pass from Shahada Akter Ripa.

India's Lynda kom Serato was adjudged the Most Valuable Player of the tournament and the highest goal scorer with five goals. Bangladesh team took honors for Fair Play.

After the match India coach Thomas Dennerby said, " We did not play perform so well today honestly. Our creativity and passing game at the midfield was not good at all today. Bangladesh midfield was much quicker than ours and we were taking too much time to pass around. We were forced to play longer balls than we really wanted to do. But of course we won the competition and I am happy for that."

Bangladesh coach Golam Robbani Choton said he was very pleased with the result and was happy that his team gave all their effort but they were unfortunate to see the title go to India.