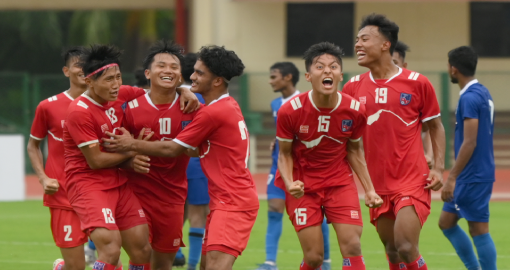 Nepal and Bangladesh start with wins

Nepal and Bangladesh bagged three points from their opening fixtures of the SAFF U20 Championship that took place at the Kalinga Stadium on Monday.

In the opening match of the day, Nepal made light work of Maldives defeating them 4-0, while Bangladesh edged Sri Lanka 1-0 in the another match of day.

Nepal went in front in the 42nd minute through Dipesh Gurung’s strike. The ball parried by Maldives goalkeeper Shaihan Ali off Ayush Ghalan’s free kick found Gurung unmarked outside the penalty box, and for his part, Gurung fired in top corner.

Nepal gained their rhythm following the goal and were rewarded in the 57th minute when Sugam Suwal collected a pass from Kritish Ratna Chhunju and made a solo run before beating the keeper with ease.

The third for Nepal via a penalty from Kritish Ratna Chhunju in the minute while Managya Nakarma sealed the win in the fourth minute of added time.

Following the win, Nepal team coach Megh Raj KC said that he was impressed with team’s play and was looking forward for more better performance from his squad.

“ Both teams worked hard on the field, but Nepal had put a little more effort today. This is the first step towards our aim to lift the trophy and we shall work hard in every remaining match,” added KC.

Maldives coach Ahmed Shakir said that his needed improvements in the midfield and in the defense line.

Likewise, produced a 71st minute goal from Mirajul Islam to seal the win against Sri Lanka in the second match of the day.