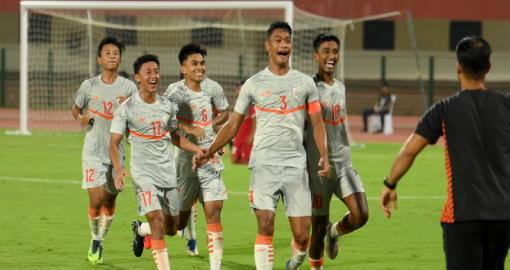 India established themselves as the title contenders of the SAFF U20 Championship 2022 following their empathic 8-0 win over Nepal in the match played at the Kalinga Stadium on Monday.

India made a sedate start to the tournament going down to Bangladesh 2-1 in the opening match but the victory against Sri Lanka in their second match slowly built the momentum to unleash their true potentials.

The match against Nepal was seen as a competitive fixture that would decide India’s fate in the tournament, but it turned out to be an easy affair for the home team bagging seven goals in the second half alone.

Nepal, on the other hand, were high on confidence after their comfortable 4-0 and 3-0 victory against Maldives and Sri Lanka respectively. However, a lackluster performance from Nepal gave India a chance to dominate all departments of the field.

India had their opening goal in the 32nd minute through Taison Singh Lotongbam but still no body had expected the game to take a complete turn in favor of India in the second half. A quick double by Parthib Sundar Gogoi in the 50th and 51st minute gave a glimpse of what was about to explode in the later stages of the match. Taison Singh Lotongbam was again on the mark in the 64th minute, while Himanshu Jangra (71’), Tankhadar Bag (78’), Gurkirat Singh (90’) and Shubho Paul (90+3’) also had their names in the scoresheet for India.

After the match, Nepal assistant coach Bal Gopal Shahu said: “The match has shown us that we need to work really hard in the next match against Bangladesh. India has shown their quality. I think we should have initially played more defensively. I think the speed and the physical aspect of the Indian team really dominated us in all departments. Every ball we lost, India made a good use of it.”

India team coach Shanmugan Venkatesh said: “I am very happy with the result. It’s just a second win of the tournament. Our job is to now focus on the next game. I have to ask my boys to be humble. Nepal is a good side, but it was not their day today. You cannot give your 100 percent every time.”

In the first match of the day, Sri Lanka came from behind to snatch a point from their 1-1 draw against Maldives.

Aiham Hamdoon’s lead for Maldives in the 74th minute was cancelled out by J.G. Theshan Thushmika in the 90+6th minute.

Sri Lanka ended the tournament with a point from four matches.