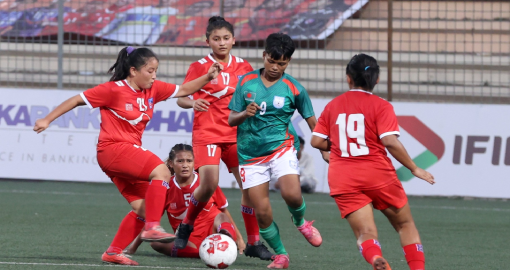 Barsha Oli’s late strike earned Nepal the valuable three points against host Bangladesh in their second match of the SAFF U15 Women’s Championship being held at the BSSSMK Stadium in Dhaka on Saturday.

Oli scored in the 87th minute utilizing a free-kick from Simaran Rai. Upon receiving the ball with just the keeper to beat, Oli obliged. The result ended 1-0 in favor of Nepal.

With the win, Nepal moved to the top of the table with six points from two matches at the end of the first leg. Bangladesh follows with three points.

Despite repeated attempts by Bangladesh, they were unable to breach the Nepal line defense which stood firm throughout.  Their inability cost them dear as Oli, who had scored four goals against Bhutan, grabbed the opportunity with just three minutes remaining in the clock.