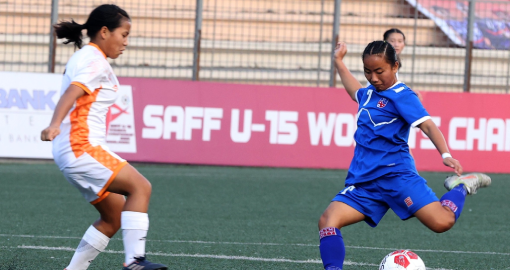 Sunu Pariyar’s goal right after interval earned Nepal a 1-0 win Bhutan in their second leg of the SAFF U15 Women’s Championship 2022 being held at the Kamalapur Stadium on Wednesday.

Pariyar scored in the 46th minute to give Nepal nine points from three matches. Nepal occupy the top of the standings with nine points, followed by Bangladesh with six points.

Pariyar had come off the bench replacing Barsha Oli during the half time.

As for Bhutan, the loss ended their campaign with no points to their credit.  They looked very destined to bag a point from their last outing in Bangladesh as they strengthened their defense, keeping Nepal’s key player Barsha Oli at bay. Oli had previously wreaked havoc in the Bhutan defense scoring four times in the Nepal’s 7-0 win.

Nepal take on Bangladesh in the last fixture of the tournament on 11 Nov. A draw against the host will earn Nepal their maiden trophy, but a loss will see Bangladesh keep home the trophy.