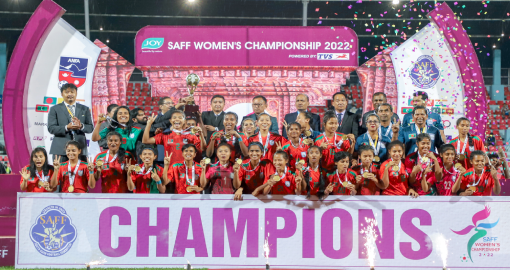 Nepal's hope of lifting the title in front of a sold out crowd at Dasharath Stadium ended in agony.

Backed by a vocal crowd Nepal slowly began to put some pessure in the second half. With rain pouring heavily, Anita Basnet pulled one back in the 77th minute. But any comeback from Nepali side was quickly distinguished as Sarkar scored Bangladesh's third in the 77th minute.

It was Bangladesh first ever win over Nepal in the SAFF Women's Championship.

Bangladesh's Sabina Khatun won the Player of the Tournament award. She also won the highest goalscorer award with eight goals.